click on any photo to see a larger version 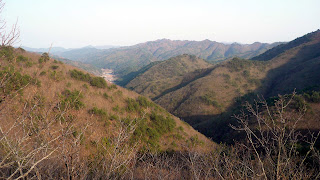 This weekend I was joined by A.J.Howarth for the long march north out of Yeongyang county. Saturday we walked some 25kms between the passes of Hanti-jae and Pangbi-ryeong crossing 12 peaks including 974m Chilbo-san. 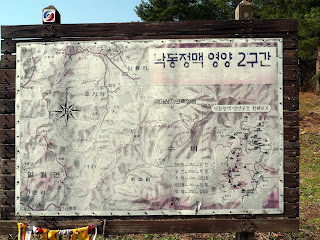 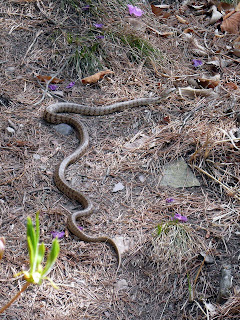 The hills in many areas of the country are now lush and green, with azaleas and other plants in full bloom - conditions that Roger Shepherd is currently enjoying on the Naknam ridge in South Gyeongsang province. The Yeongyang area however has just come out of its driest winter for years and has thus far received no significant spring rain to bring the forest back to life, the ridge was bone dry on Saturday but rain came on Monday and more is forecast for later in the week so hopefully next time we're out there's a bit more colour. 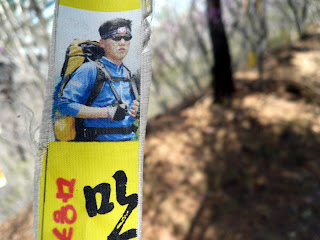 The bloke above is one of the most prolific ribbon-hangers on the Baekdu-daegan trail and features in the much celebrated video "The Ribbon Tree" , no one-hit wonder he's obviously giving the jeongmaek's a go like so many others, walking the Nakdong north to south.

Chilbo-san (seven treasures peak)- the last, largest and only named peak of the day. 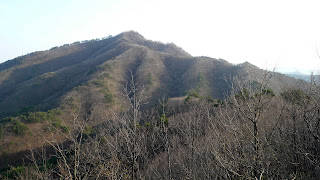 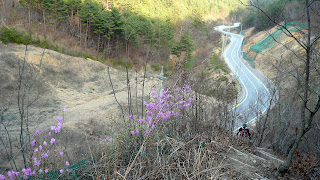 Howarth with an '82 Hyundai Pony flatdeck in original Lemon-chiffon, one of a fleet of classics on the streets of Yeongyang. 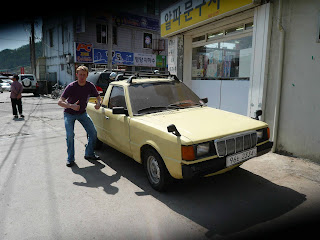 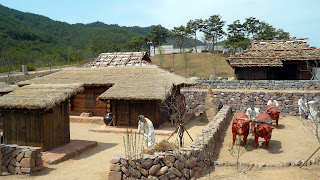 The plan was to walk Sunday through to Uljin county, but Howarth went home with sore legs and I got lost taking an ambitious offroad route to the trail head leaving little time for the hike, so I checked out the Yeongyang mountain village life museum, a really impressive building with no visitors on a fine weekend.
The museum has the expected displays of farm tools and stuffed animals but also celebrates the shamanic history of the area. 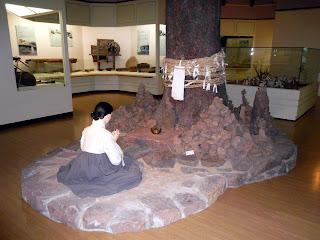 In the middle is Madam Hwang of Ilwol-san, to her right is her daughter and to her left Oknyeo, whose shrine I came across last week.

Mireuk Cave is the energy centre of Yeongyang's famous mountain Ilwol-san and is said to hold the energy of the sun and the moon. 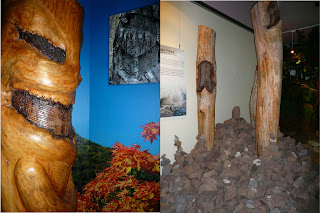 We first came across pines cut with the v-shape a few weeks ago on the trail and i offered my own theory on them based on the history of other parts of the country. These displays perhaps suggest something different, maybe the pines have long been harvested around here for fuel, or carved for some other purpose.

An old map of Yeongyang 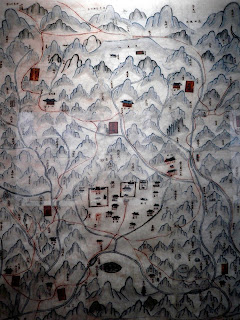 Alright so we still haven't broken through Yeongyang, so this weekend I'll be back out to hopefully get through into Bongwha and Uljin for the final push into Taebaek.
Four days left

Howrath didn't go home with sore legs and will sue you if you ever slander him in such a way again.

Next time you take a picture of me, next to a classic automobile, will you tie your hairback.

Is turdling really a word that needs verifying?

get stuck into it douch-bag, buddha can't wait forever! 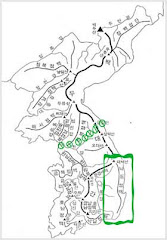 The line within the square shows the approximate location of the Nakdong-jeongmaek ridgeline. The trail starts in the southern city of Busan and runs north 430km to near Taebaek city where it meets the Baekdu-daegan ridge (bold black line)

Jeongmaek's are ridges which branch off the main Baekdu-daegan ridge. There are 14 such ridges in Korea, 9 of which begin in South Korea. The Nakdong-jeongmaek has, to my knowledge, the most established long distance hiking trail of all these lesser ridges, possibly due to it's approximate north-south course.
For a list of all these ridges, follow the link from David Mason's Baekdu-daegan page.